You have to love a country which stops everything for a horse event, and in this case Australia’s Melbourne Cup Day definitely qualifies as a candidate for My Perfect Nation. The Melbourne Cup, held in Australia’s spring (North America’s autumn) is popularly known as “The Race That Stops a Nation.” A public holiday in Victoria, the rest of Australia tends to take a 3 PM break to party, bet on the horses, and simply enjoy fast horses doing what they do best.

Yes, I was definitely born on the wrong continent. 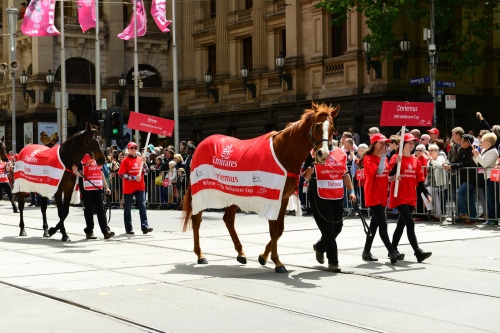 One thing that’s certainly on my list when I visit Australia is Living Legends: The International Home of Rest for Champion Racehorses. This retirement farm is literally right next to the Melbourne Airport, located on more than 1,500 acres of bush-land (that’s Australian-speak for semi-urban wilderness) is where some of Australia’s greatest champion racehorses have been retired to live in comfort.

Here you can meet Melbourne Cup winners like Efficient, Brew, Rogan Josh and Zipping. You’ll  also find a dozen other legends of the turf, such as the flashy chestnut sprint champion Apache Cat, or two-time Horse of the Year Silent Witness, who broke Cigar’s famous record of 16 consecutive wins in the 2005 Queen’s Jubilee Silver Cup.

Living Legends maintains a fun special events calendar, but you can join them just about any time of year for a tour to meet the horses, plus a walk through the bushlands (they have a mob of wild kangaroos!) and the opportunity to take tea at Woodlands Historic Park.

This year the race, which is just shy of two miles and for 3-year-olds and up, is on Tuesday, November 1st. With a purse of over $6 million Australian dollars, it’s one of the richest races in the world, edged out only by the Dubai World Cup and the Japan Cup. It’s certainly a popular betting race, and if you want to try your luck, you can get the latest on Melbourne cup betting at William Hill.

Of course, a race like this is celebrated with a over-the-top pageantry and excitement. The Melbourne Cup Carnival showcases the best horses in racing with multiple stake races, plus events celebrating everything from high fashion to family. There’s even a parade right through downtown Melbourne featuring jockeys, trainers, celebrity guests, and past winners of the Melbourne Cup. It’s truly a festival of the Thoroughbred horse!

The more I see and hear about Melbourne Cup, the more I want to add it to my dream Australia itinerary. If seeing the best racehorses in the world, both in action and after retirement, is on your bucket list, it’s hard to see how you could do much better.